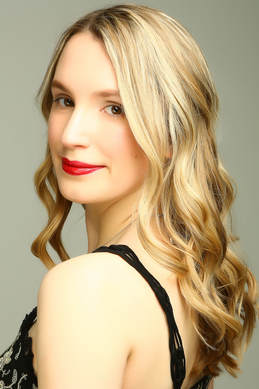 '' Anna Marie McLachlan...made a convincing fist of a young man in a difficult position and sang a touching 'Che faro senza Euridice', the stand out aria of the piece. She was especially good in the middle of her voice, which contains an earthy warmth.''
Anna Gregory, review of Grassroots Opera's production of Gluck's 'Orfeo ed Euridice', February 2018

Anna Marie McLachlan is a mezzo-soprano from London and has recently completed her studies for a Masters in Vocal Performance at Trinity Laban Conservatoire of Music and Dance, under the tuition of Alison Wells and Robert Bottriell. Whilst there, she participated in the English National Opera Mentor Scheme. Prior to this, she studied English and Music at the University of Southampton, where she was a choral scholar with Cantores Michaelis, directed by Keith Davis.

Anna was selected as a finalist in the Schubert Song Prize, singing in a masterclass with Dame Felicity Lott, for the London Song Festival. She has also performed in masterclasses and workshops with eminent artists such as Simon Keenlyside, Nicholas Kraemer, Teresa Cahill, Eugene Asti and Rosa Mannion.

Solo engagements include alto soloist in Pergolesi's Stabat Mater with the Isca Ensemble, solos in Vivaldi's Gloria and Haydn's Nelson Mass, in Exeter Cathedral, performing folk songs by Berio at the Southbank Centre as part of the Rest is Noise Festival, participation in Eugene Asti’s Richard Strauss project, the alto solo (Cantata BWV 161, J.S Bach), directed by Steven Devine at the Old Royal Naval College Chapel and recitals at the Old Royal Naval College Chapel, St Martin within Ludgate, London and Claygate Music Festival. Anna was due to make her solo debut at St John's Smith Square in 2020, but unfortunately this was cancelled due to Covid-19.

During her studies at Trinity Laban, Anna has been a member of the Early Music Ensemble, singing at the Greenwich Early Music Festival, and the chamber choir, performing in various venues including the Barbican, Chelmsford Cathedral and the Cutty Sark.

Future engagements include the role of Minerva in the premiere of @emele (Roger Simmonds) with Oxfordshire Contemporary Opera.

Alongside her performing career, Anna teaches regularly around London and Surrey.